Electrical Hazard Shoes Provide you with a Secondary Source of Protection from Electric Shock or Electrocution
Electrocution (fatal and non-fatal) is the massive flow of electrical current through a person causing physical damage to the muscular and nervous system. Protection from electrocution is accomplished by insulating the body from physically contacting an electrical source with non-conductive material.

Example: Copper wire, used to wire houses, can be handled manually even though it has electricity flowing through it because the copper wire is wrapped with a non-conductive material (sheath) that protects you from the electrical source. If you touch the copper wire directly while an electric current is passing through it, you will receive an “electrical shock” or be electrocuted.

Electrical Hazard (EH) shoes provide a secondary source of protection for you from electric shock or electrocution the same way as the sheath of the electrical wire. Electrical Hazard shoes have a special sole and construction that insulates you from the electrical source. The special sole is composed of non-conductive and electrically insulating materials, that won’t conduct electricity. These shoes are said to have a high resistance to “electrical current” or the “flow of electricity”.

Technically, these special shoes are rated in the highest range of Resistance for safety shoes at 1 GigaOhm (1 Billion Ohms, 1,000,000,000) of Resistance or higher, which is required by ASTM Standards for all Electrical Hazard safety shoes; and they are designed to resist an electric charge of 18,000 Volts at 60 Hertz for 1 minute with less than 1 milliamps of leakage in dry conditions. Electrical Hazard shoes, or non-Conductive shoes as they are sometimes called, are designed to be use only as a secondary source of electrical hazard protection, but they provide very good protection for Electricians and others working with dangerous, open, electrical circuits.

Conversely, Conductive shoes are designed to make it easy for electricity (specifically, static electricity) to flow from the wearer through the shoes to ground, in order to suppress the occurance of static electricity, static discharges, and static sparks . People working in highly flamable and explosive environments have to wear this kind of footwear because the smallest spark can cause a catastrophic explosion or fire.

Technically, Conductive shoes have special materials in the sole and specific construction techniques that create a very low electrical Resistance (0 Ohms to 500,000 Ohms) in the shoe, so electrostatic charges on the wearer are eliminated when they flow very easily and quickly through the shoes to ground. People working in dangerous, highly flamable and explosive environments have to wear this kind of footwear because the smallest spark can cause a catastrophic explosion or fire.

In summary, Electrical Hazard (EH) shoes protect people from electrocution because they are built to be “non-conductive” and prevent the flow of electricity through them, and conversely Conductive (CD) shoes protect people from explosions and highly flamable environments because they are designed to “conduct” static electricity and eliminate electrostatic discharges and sparks. Static Dissipating (SD) shoes work the same way as Conductive shoes, but they are used in less dangerous environments ,like around printed circuit boards and where static sparks are a serious nuisance for workers. 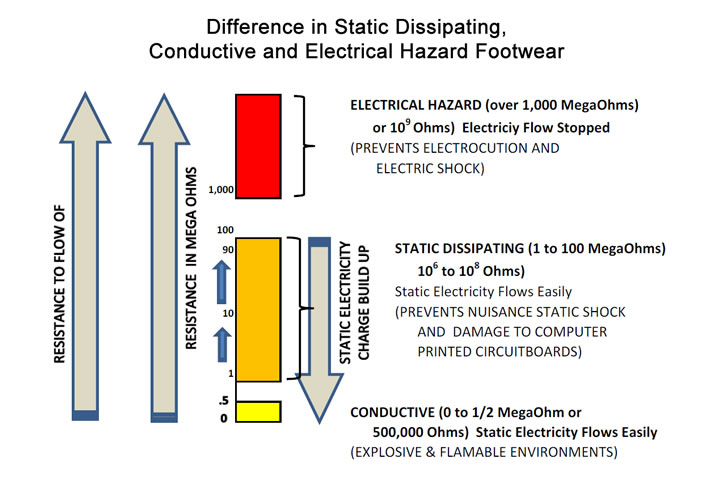 The lowest resistance range is for Conductive (CD) shoes, which drastically reduces the build up of static electricity. Static electricity will flow easily from the wearer through the safety shoes to ground, and that keeps the wearer from creating a spark when touching anything . This is critical for explosive and very flamable environments, where a spark can be catastrophic.

Going up the scale, the next range of Electrical Resistance is for Static Dissipating (SD) shoes, which allows for enough flow of static electricity to eliminate nuissance sparks and sparks that could damage printed computer circuitboards

Finally, the highest range of Electrical Resistance is for Electrical Hazard (EH) shoes, which are non-conductive and impede the flow of electricity, thereby previenting the wearers, like electricians, from electrocution and electrical shocks from open circuits of electricity .